The HulkBuster, Tony Starks answer to stopping The Hulk when necessary. The Marvel cinemeatic universe has done an amazing job, in showing us as many different suits as possible and this, The Mark XLIV suit is the biggest, baddest iron man suit ever created, in my opinion. 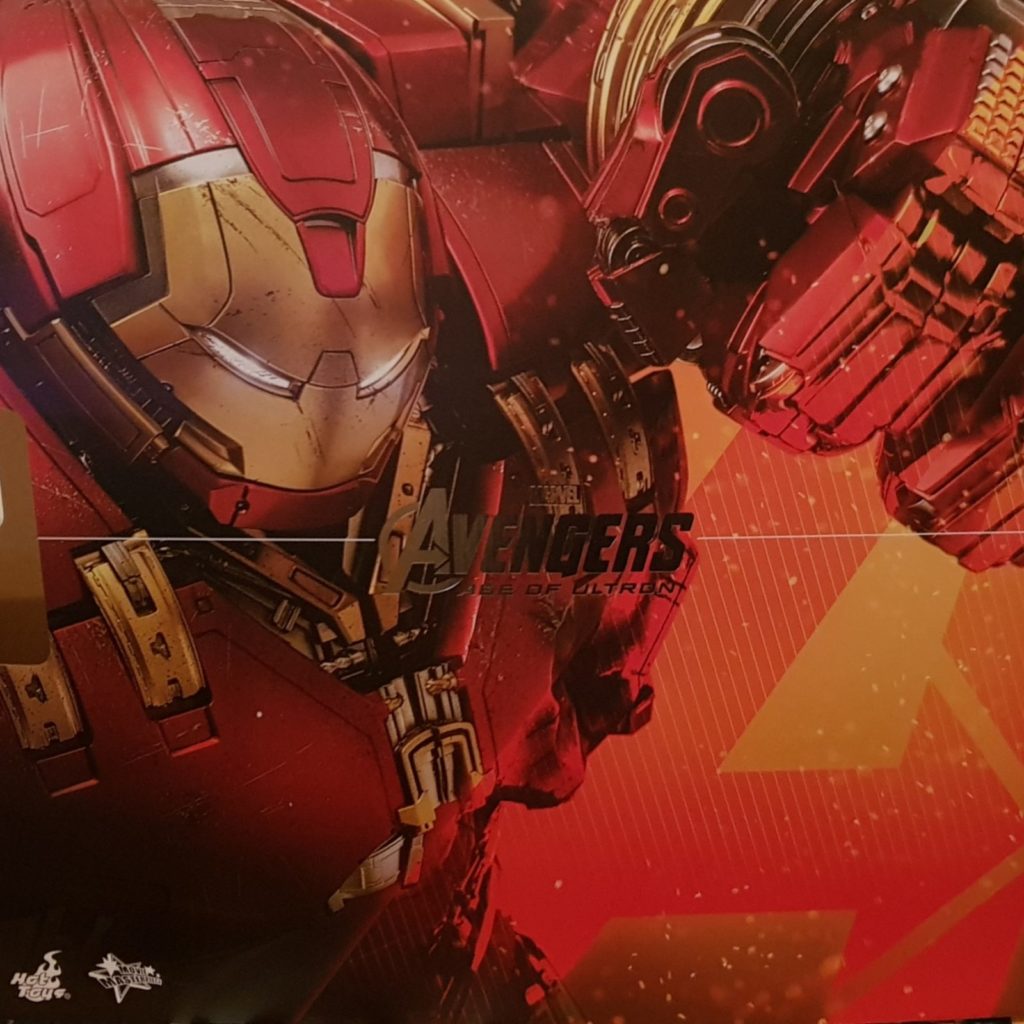 In the movie Avengers: Age Of Ultron, there is a moment where Scarlet Witch puts a mind spell on the Avengers, Puts them into a dream like state and shows them a false reality. Unfortunatley for Bruce Banner, it shows him a nightmare reality as to which the Hulk takes over, he believes the dream to be real and causes him to go on a rampage, we do not know what he sees, we just know its not good and needs to be stopped.

This is where Tony steps in, he has a  trick up his sleeve for this occasion as a pre caution, Code name Veronica, A satalite holding a secret weapon….. behold The HulkBuster!!!!

This fight scene has to be one of the most memorible scenes through out Marvel's 10 Years, I was hyped when Hot Toys announed they were making a 1/6th scale figure and man this thing is impressive! If you know Hot Toys you know this was going to be amazing!

HULKBUSTER straight out of the box.

When the first wave got announced i missed out on getting my hands on one, fast forward to early 2019 they announced a deluxe version with a jack hammer arm. 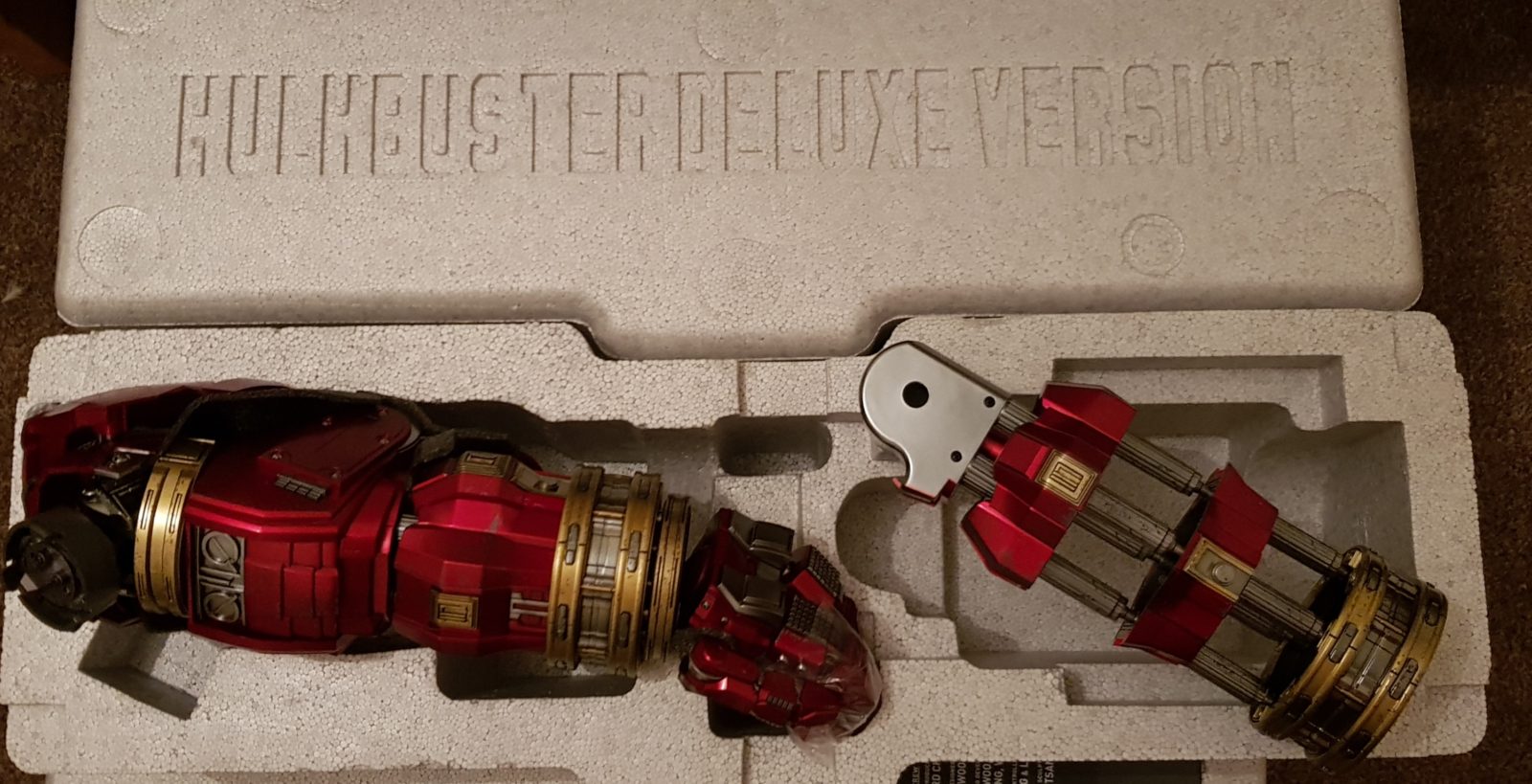 Jack Hammer Attachment.
This was it i knew i had to get one and May 2019 it was pre ordered, delays occured, covid-19 happened, but Aug 2020 it has finally arrived!!!!! Even with the delays this piece did not disapoint!!!

Look at this face!!
The first thing i will say about this figure is, Holy $$$$, The box was huge!! The figure is massive and weighs a bit too.

Upon opening Hot Toys have done a great job with their packaging, trying to get it out took 2 people! I maneged alone to take the figure out of the box, from there my jaw dropped and i couldnt stop smiling! The detailing is so impressive, next i took out all the components for the figure including 30…. yes 30 tiny TR batteries, 3 in each section it lit up, 1 set in each arm, 1 set in each leg, the back, the head, 1 set in each arm weapon. Then 2 sets in the iron man bust, 1 set for eyes and 1 set for the chest. So impressive once it was all lit up, but this is where it got a bit frustrating, it was fiddly and some of the chest pieces to remove was a bit awkward, plus it took over an hour to complete. But dispite that once it was done it was just amazing, WOW what an incredible figure to look at!!!

So impressive lit up!!

The articulation is impressive too, they have done a cracking job with the arm rotations and it stands extremely well. It stands beautifully in my cabinet, I love it!!!

Its been in the cabinet a few days now and i just cant stop looking at the figure. I know I have said the word impressive a lot, but thats just what it is, an incredible figure through and through. I give this figure hands down 10/10 (yes i am probably being biased).

I hope that Hot Toys keeps up the good work, even though i know they will with the products i have seen and figures to come.

Please check out the video below for my opening and review of the figure, please like the video, share and subscibe to see more. Hopefully more Hot Toys to review in the future to review for you all.

Quick thank you to HR1 Brothers, if it wasnt for you all giving me the ££££ for my 30th birthday, i would not have been able to pre order this bad boy!!!